Last week, Indore-based B2B ecommerce platform ShopKirana achieved a unique milestone. In its 12-hour-long flash sale, the startup generated more than Rs 1 crore from 4,000 users, all from its home city.

Unlike B2C ecommerce platforms that give discounts on a daily basis, B2B player ShopKirana gives no discounts. But the flash sales pushed retailers.

“Most retailers prefer us because such products are not easily available at traditional distribution systems, either due to service issue or because it is out of stock. In the first two hours of the sale, we sold 20 lakh pieces of Clinic Plus shampoo in just one city. These are low average selling price (ASP) items, which modern retailers don’t sell due to low RoI. But we give demand for such items from the small retailers to the brands.”

He adds that about 50 percent sales (out of the Rs 1 crore) came from farm products.

On an average, in India, local (unorganised) retailers often depend on 70-100 distributors for stock replenishment.

Founded in 2015 by Tanutejas Saraswat, Sumit Ghorawat, and Deepak Dhanotiya, Indore-based ShopKirana was one of the early players to connect retailers and brands/factories directly using a mobile app. It helps retailers with generating better sales and keeping less inventory by buying in real time, and by keeping track of the data on their mobile phone. 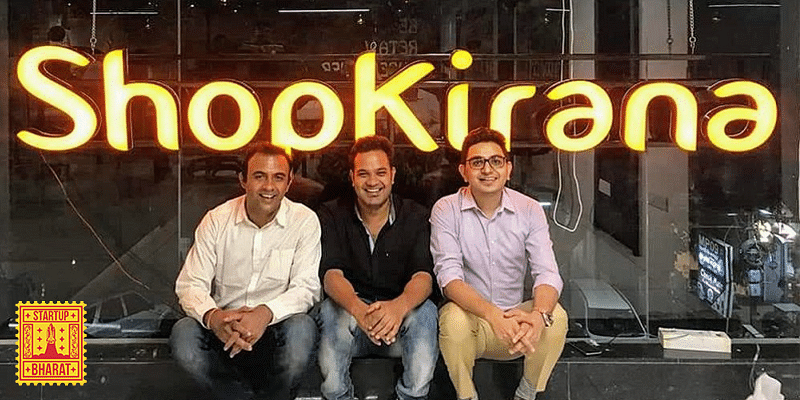 At the beginning, convincing the retailers – who are not tech savvy at all – itself was a huge challenge. “Most of them do not even use calculators. But once they started using our service, many of them saw Rs 2 lakh - Rs 3 lakh worth of orders were done via our app,” Tanutejas tells YourStory.

Within four months of its launch, ShopKirana’s mobile application got 500 retailers on board with just 10 brands integrated in the system, and the company had managed a turnover of more than Rs 50 lakh.

Earlier this year, the startup expanded to Jaipur and Bhopal, and currently has more than 12,000 retailers on its platform. It aims to expand to 30 cities and on-board one lakh retailers in the next 18-24 months.

ShopKirana is targeting 10 percent market share in Tier II cities in the short term. It has also launched local content in Hindi and Gujarati to target a wider audience.

“We are piloting animated characters in our app - which will use local language for conversations with the retailers, and hence understands their behaviour,” says Tanutejas.

In 2016, ShopKirana raised an undisclosed amount of funding from Atul Jain (ex-Samsung), Jai Kumar Nair (formerly with Mondelez), and Anil Gelra (Founder of Hola Chef), along with a few other veterans.

The story behind the fund raise is also as interesting as the company’s unique feats.

Despite the heterogeneity of the Indian market, in the B2B retail sector, Tanutejas believes that if a business doesn’t make sense in one city, it won’t make sense anywhere else. So, the team waited till their business model and unit economics made sense, before raising funding. “We did not want to burn anybody else’s money on a model which may not work,” he says.

The team met Yuki Kawamura, Principal at AET Fund, via reference, and presented their pitch for about 15-20 minutes. Within an hour, they got the commitment from Yuki.

Tanutejas explains: “We were clear (in the pitch) about some points: retailers buy about 40 items via our platform in a month. Otherwise they have to meet some 400 distributors every month. Interacting with each sales executive takes at least 15 minutes, which means nearly 100 hours in a month. We save those 100 hours for a retailer every month.”

Incidentally, in a recent interaction with YourStory, Yuki had said what he looks for in a startup is the business model.

“It doesn’t matter if the current product itself is good or bad. If they’re still in an early stage, they are trying to make the product market fit as they go. It’s more about the business model, monetisation, and user acquisition.”

With a zero-inventory model, ShopKirana presents itself as a purchasing company and multi-brand distributor for retailers. The demand they get from retailers are sent to the brands, which they deliver to ShopKirana’s warehouse in 48 hours (they have one warehouse in each city they are present in). And ShopKirana delivers it to the retailer the same day, mostly in three to four hours.

The company claims it has generated Rs 150 crore in revenue since 2015. Tanutejas says the company’s revenue has grown 10x in the last six months, and they are operationally profitable.

EMPOWERING RETAILERS WITH THE POWER OF FINANCING

Can Culture Save an Organization?